What happens after you’ve run in the World Championship marathon

After what has been a whirlwind few months, it has been nice to get back home and back running the same routes I have been running for years. Whilst I thoroughly enjoyed the last few months, it has been great for me to get back down the track on a Tuesday night at the Carmarthen Harriers club-night, where my brother and old coach, Delyth Brown also trains. Even though I have loved my recent training camps in Portugal and Paris, sometimes it’s great to run the routes I used to when I started out in the sport just over 9 years ago. It’s only really now I have had the chance to look back at my journey so far and realise how far I have come, and what it took to get here. While it’s nice to look back at my journey, I am also fully focussed on the future and I am determined to continue training and improving my personal bests to make more Great Britain teams. Another thing I love about being home is the scenery, there is just something about running hard in some rural Welsh countryside which I just love.

Since having a compete rest week immediately after the marathon, I have now resumed full training and have slowly built up my mileage each week. It wasn’t until two and a half weeks after the marathon that I did my first session as without a sufficient recovery period, I would never be able to resume full training and progress as my body would still be carrying fatigue. With each progressing week, the sessions became gradually more challenging and my ‘long run’ became slightly longer. I think it is important for runners of all levels not to jump straight back into full training as this carries a great risk of injury. Instead, slowly build up the miles and intensity each week so that your body is able to adjust and cope with the new stress. 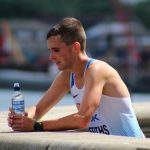 Josh reflecting on what he achieved in London 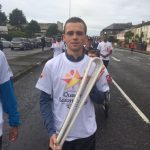 As a Welsh athlete, the Commonwealth Games are a big deal, and something I have been aiming for since I started out in athletics back in 2008. Having run 71 seconds under the Welsh Athletics qualifying time of 2:16:00 back in April, all I have to do now is wait and cross my fingers that my name is on the team-sheet when it is selected in December.

As part of the Commonwealth Games, similar to the Olympics, the ‘Commonwealth Baton’, which carries a message from the Queen, travels around all of the Commonwealth nations before arriving in Australia before the start of the games. On September the 5th, I was lucky enough to be given the opportunity to carry the Baton through Swansea, and hand over to Leon Britton (a Swansea City FC legend) before joining him on the last leg as we arrived at the National Waterfront Museum in Swansea. This was an amazing experience for me and a real honour to be given such an opportunity. The Commonwealth Games Marathon in April 2018 will be my next marathon if I am selected.

Last weekend I competed in my first race since the World Championship marathon on August 6th. While this race is not a target race for me, it was an indicator of my current shape heading in to the Cardiff half marathon on October 1st. This is a team competition comprising of 4 athletes per team, each running a 5km leg. This is a competition I really enjoy as it is rare in the sport of athletics that you get to compete as a team.

Last year we (Swansea Harriers) won the Welsh title and we were able to do that again this weekend despite some stiff competition from Cardiff AAC who also have a great team. It was great to put my Swansea Harriers vest on and line up alongside my teammates for the first time since London in April. This will also act as good preparation for Swansea as we aim to win the British Road Relay title in Birmingham on October the 7th.

The 2017 Cardiff Half Marathon will be my first big race since the World Champs and a race which I have done many times in the past and really enjoyed. In 2014 I had a small breakthrough here as a 20 year-old when I ran 66:28 for the half marathon which put me at the top of the U20 UK ranking that year. Therefore putting my positive past experiences at this race and my experience from competing at the World Championships together, I hope that I can run a positive race here again. Whilst this is a big race, it won’t be my overall aim for the upcoming road racing season, but a stepping-stone in my journey towards what I hope will be the 2018 Commonwealth Games Marathon.

I believe that it is vital for athletes of all levels to set themselves both long-term and short-term goals so that you know exactly what you are working towards, and so that you can effectively plan with your coach the best route to get you there. Setting clear defined goals really helped both my training and motivation as you are always working towards something as opposed to just running blindly.