April was an interesting month. You probably saw what I wrote about my Manchester Marathon experience. This time I want to cover a bit about what’s happened since then.

Firstly, it took me 10 days to be vaguely recovered. I won’t lie, I felt utterly rubbish for 10 days. I ran, and it was broadly ok, but I was totally wiped out and felt quite unwell for a while. So much so in fact, that I decided to get some blood tests to check I didn’t have a life threatening disease or the early onset of the male menopause. I didn’t. In fact the day after I had the bloods taken, I felt normal again. Typical I guess. I’m pretty convinced now, by the way, that I was unknowingly unwell in Manchester and that’s why my temperature rose to the scary levels it did.

Let’s not go back there, I now felt better and so ventured out into the lovely North Downs for some unstructured long hilly running. Lots of space, lots of clean air, freedom, no pressure, it was a joy and so emerged my plan for the London Marathon.

I resolved to run London for “fun” and as training for Comrades Marathon which takes place six weeks after London. With preparing for that race in mind (86k of hot hilly South African road running), I simply couldn’t have afforded the same amount of recovery time as I needed after Manchester, even if I felt capable of running that hard again so soon.

Decision made, I trained normally all week and did all Icould to makesure i didnt hit the startline ‘feeling good’. That included a fast-ish parkrun the day before and then a run to the start  of the race from my East London home, part of which was along the course which provoked some amusing exchanges with race marshals. I then ran the race purely using a (low) heart rate to guide me.

I ran relatively easy for the first half (HR c 133), and let loads of people go past me as I passed halfway in 1.26, high fiving as many people, especially children as i could to make up for all the times I’ve ignored them while in a racing mindset. 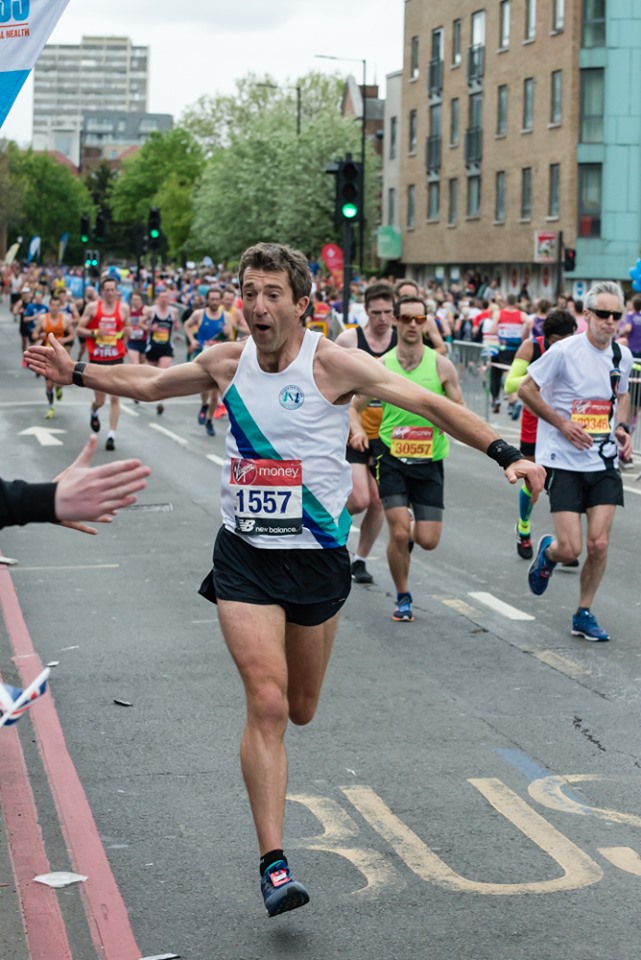 And it was fun. I picked up the pace a little in the second half and saw first hand how wrong so many people get their pacing in the marathon, but most of all I had fun. I actually felt sad as the end neared as I was having such a good time. That was a new experience!

I also had some other thought provokingly unexpected feelings. I felt like I did when I first ran a marathon in 2001 (in 3.37) when the joy of participation and then completion trumped any thought of time, personal bests, or age category placing.

After Manchester and indeed because of Manchester it was extremely therapeutic to have a reminder that running isn’t just about time based performance or race position. It’s also about freedom, space, community, and loads of other things that you know yourself and/or have been written about by way more erudite people than me. But, crucially, it’s also about learning, especially about yourself. Every single run and every single race is a new experience that brings new thoughts to your mind, that helps you process what’s going on in your life in a different way. In busy, chaotic, ambiguous and stressful times, the freedom, the space and the opportunity that running provides to connect with ourselves is invaluable.

This made me think about what running is.

Running is a sport, where we can push ourselves as hard as we choose in the search for our physical limits.

And as such running, more than any other sport, epitomises my belief in the mutually beneficial coexistence of sporting excellence and sport for all. Elite athletes inspire us to participate for they help us to see what is possible while they simultaneously benefit from our participation. The more people are interested in running, and the more famous people like Charlotte and Josh become, the more brands and businesses invest in the sport and the greater the opportunity for elite athletes to make a living from running , in turn enabling them to further inspire us with world class performances. Elite athletes may not inspire non-runners, but they mayinspire sub-elite, who inspire the participation masses, who may well inspire non-runners. In an age of acute and widespread obesity and mental health problems, this can only be good, surely?

Sporting excellence’s role alongside sport for all, is best epitomised by the London Marathon. It is something that everyone can do. For me, that idea is perhaps best articulated by my own weekend which began with a Saturday morning run with Charlotte Purdue discussing her ambitions and the race plan that would see her become the third fastest British woman of all time, and ended late Sunday afternoon looking, unsuccessfully, for Vicki Woodall on the course as she was completing her first (and only!) marathon in 6h25 on her way to raising over £1m for children with cancer.

Both humans, both running, both utterly inspiring. I challenge you to name another sport that can produce that at the same event.

Running – sport or community based pastime? It’s both, but you knew that already didn’t you!